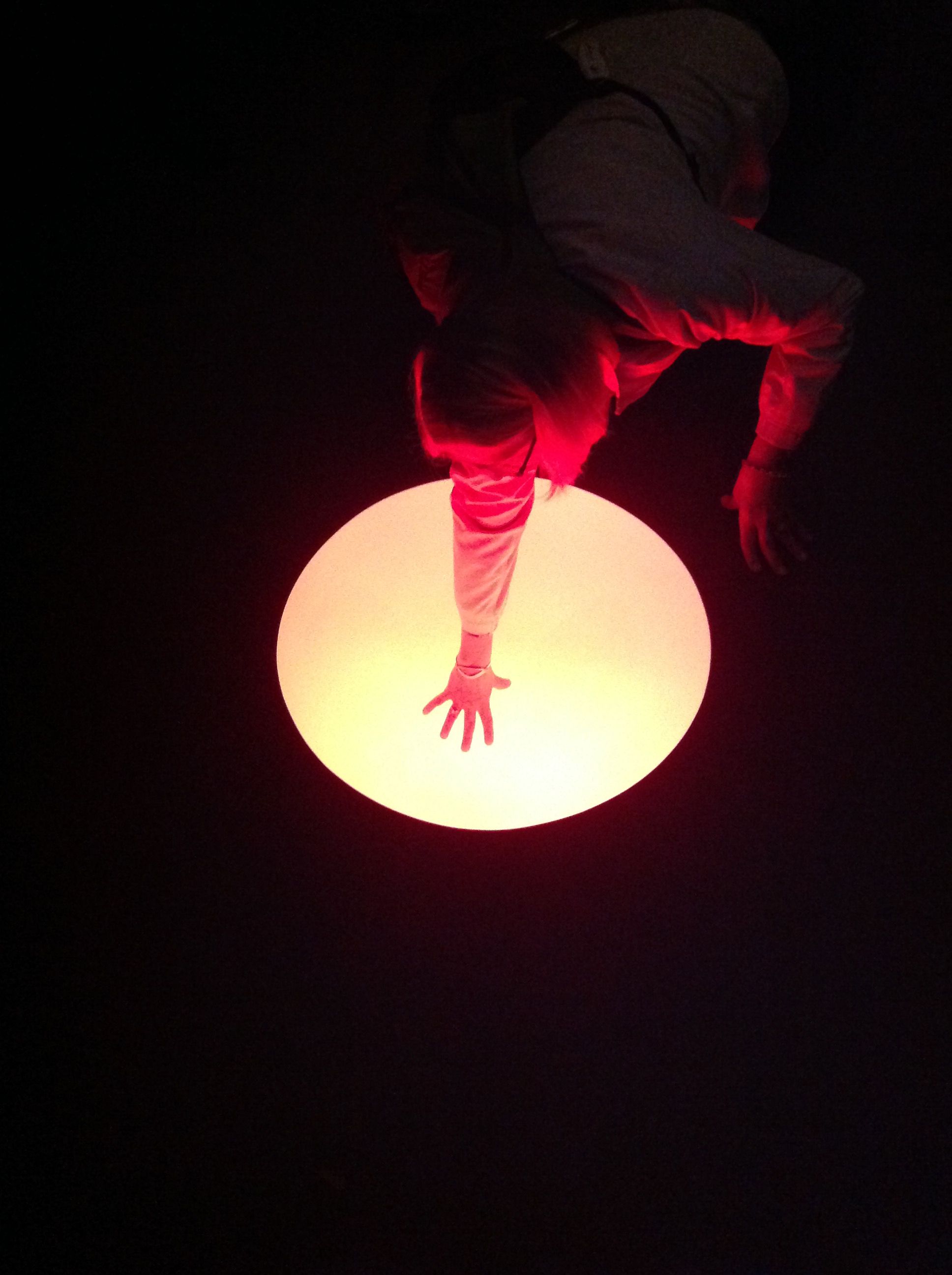 2009  some gigs with Maniacal Reason

January 15, 2009 Lucky Dog Music Hall Worcester , Mass
Opening the new year at the Lucky Dog Music Hall (formally Sir Morgans Cove) with our friends the Flock of Assholes, The Vital Might, and Quintana's Revenge, turned out to be what I shall call low expectations and very high results.  This stage is hollowed ground, the Stones have played here and countless other bands to say the least.  ABCSpike always made a stop there while doing any New England dates and tonight was the first time back in a few years.  The temp outside was around 0 degrees and inside when we got there was about 1 degree.  That would change extremely rapidly.  We opened with "Tree of Woe" by request from one of our long time Worcester fans Billy.  We very rarely do "requests" but what the hell, he has come to countless shows and knows our stuff so why not make it happen.  After Tree we were off and running.  Getting hotter and hotter as the set went on.  "No Romeo",  "Fourth Floor", "Danny Pearl", "Satellite Farms" and the final "Legend Killer" brought it all home.  Seeing the "Dog" packed on a night like this renews all faith that rock is still alive and well and a whole new audience just waiting to hear kick ass music is closer than you think.  The Flock always a crowd pleaser pummels with there 80's retro tribute of over the top pop hits from that era.  A very tight band and worth catching.


2006 "Tour De Force"
5-18-2006 Back to one of our new favorite clubs.  They treat us right and it always seems to turn into A Band Called Spike all request.  "Wendy" and "Butt Smokin Hags"  and being goofy is what they want and we giv-em what they want.  I personally like the vibe here and seem to be relaxed and just let go.  The band is also right on.  Making good friends in the Lowell/Merrimac valley and U-Lowell.  We will be back in July for a summer round.
4-1-2006 This was really strange, 3 other bands cancell to make a perfect situation for the band to dvd more than expected at the Boston show.  Extremely low turn out on a Saturday night in the city but didn't stop the band as if they were playing Madison Square Garden.   Special guest Matt Burns played drums on "Mind Fields" and "Borderline Human".  Does anyone go out anymore?
3-30-2006 Rusty G's was great.  Very loud and a good crowd including Flannel Godz and all.  It looks like "Wendy" will be played there again due to crowd insistince again.  Lowell Rocks message board rallied up the troops.  First time out with Jim's new signature guitar.
2-16-2006 Well what can be said of the first show of the year for the band.  New club, new attitude, and what turns out to be an all request VH1 type storytellers show.  An epic 20 song A Band Called Spike O'Rama.  The audience of old bandmates, friends, and straggelers began shouting out there favorites and the band pulled it off.  Starting off the show with the cult classic "Wendy" and basically playing 95 minutes straight through to closing all the catalog.  Only  "Tree of Woe" and "Twilight Strut" were not played.  "Dancin Girls" proved to be quite fun with excellent crowd reaction and cartwheels to boot.

Past Gigs and Posters 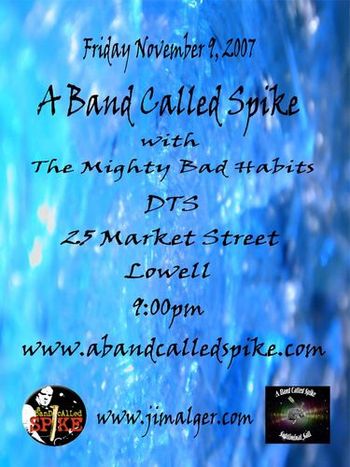 A Band Called Spike and the Mighty Bad Habits Nov. 8, 2007 at DTS Lowell 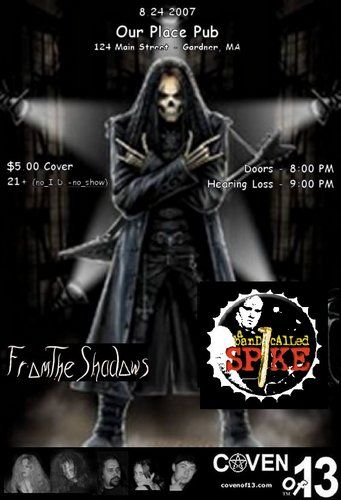 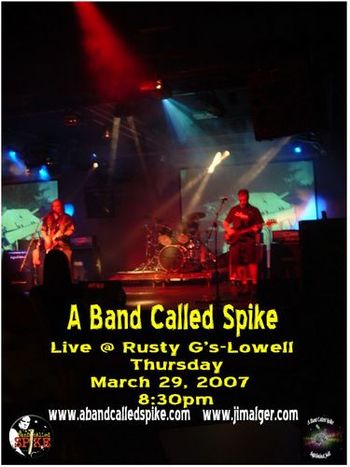 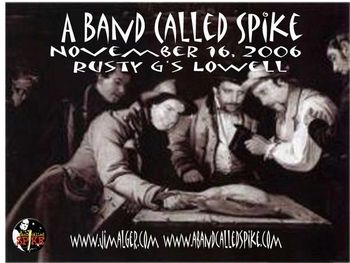 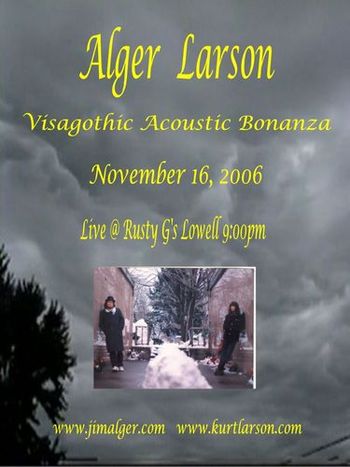 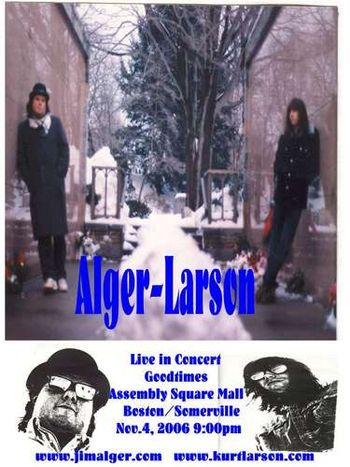 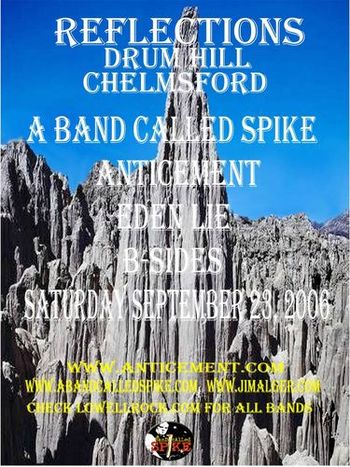 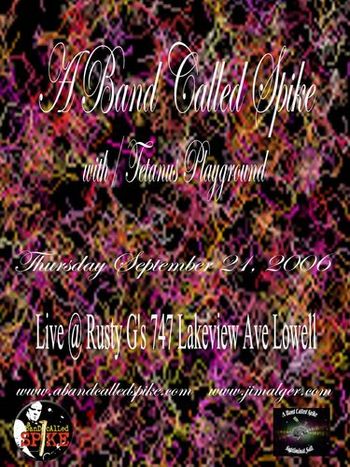 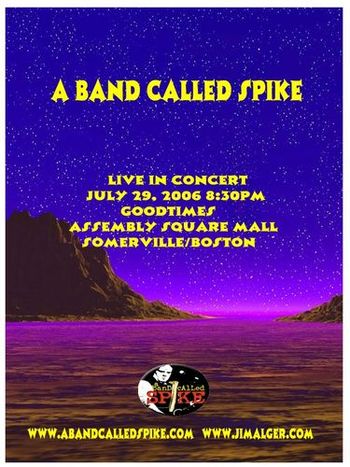 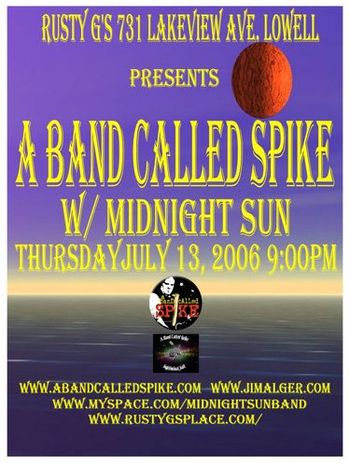 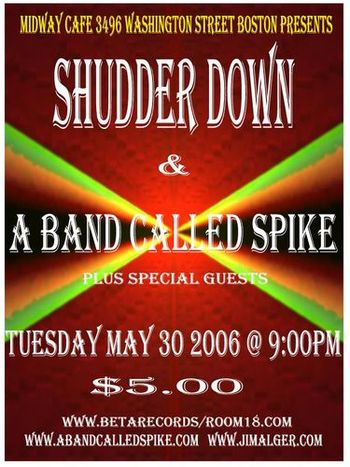 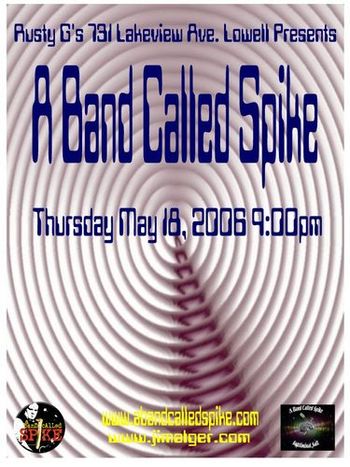 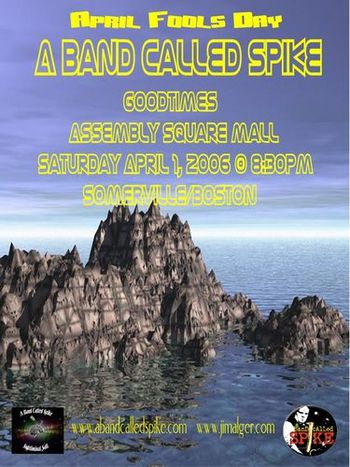 The April Fools Day show that will be filmed and recorded for a future dvd/cd package. 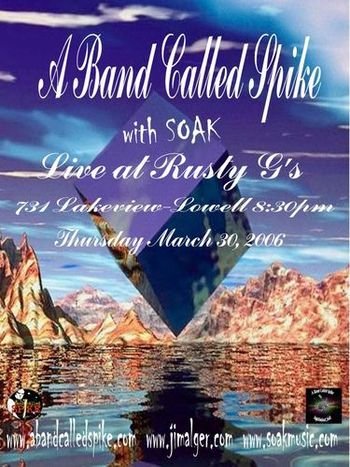 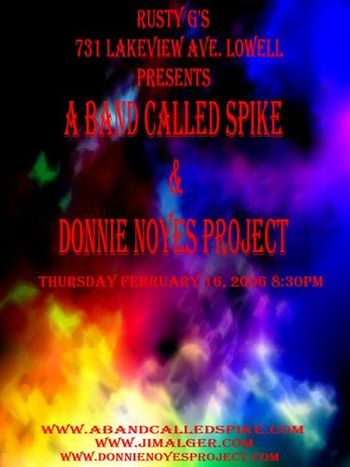 A New club in Lowell just opened earlier in the month and on the first original rock night A Band Called Spike and Donnie Noyes Project blazed through 2 excellent sets of power rock. It was an honor to be the first original bands to make history at the venue. 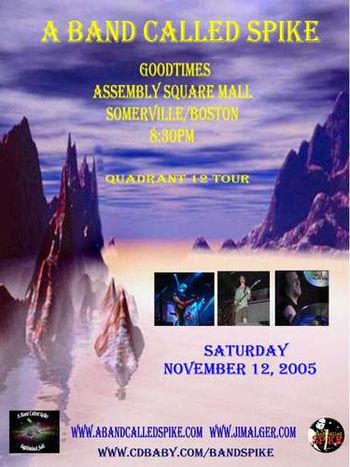 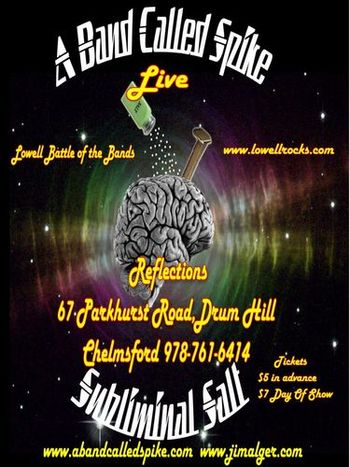 The Battle of the Band Poster 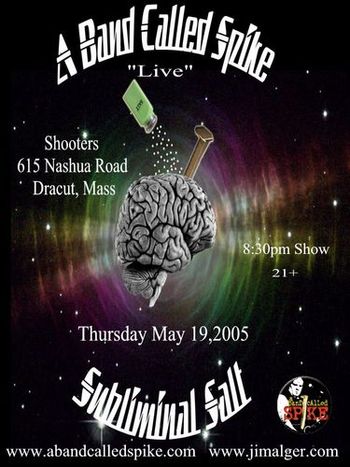 Shooters is now gone but those shows at the club will always be remembered as fun and loud. Always a great crowd too. 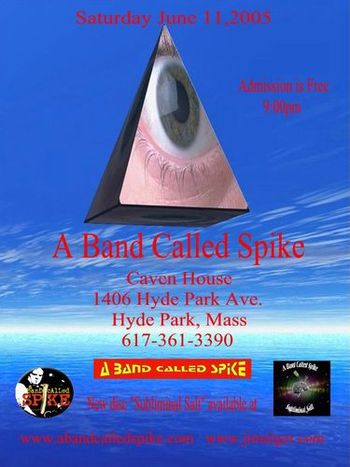 What can be said about the Caven House in Hyde Park. The crowd of mostly over 55's absolutely hated the band, in which, the band turned on them. The compliment was that one patron declared it was the " worst band he had ever seen" in which we thanked him. 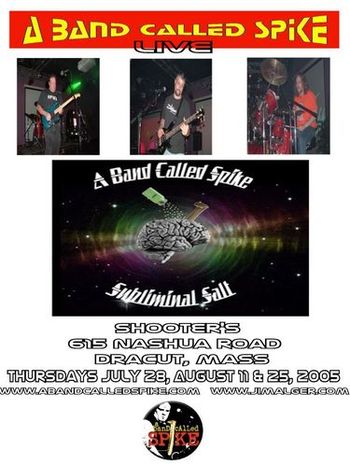 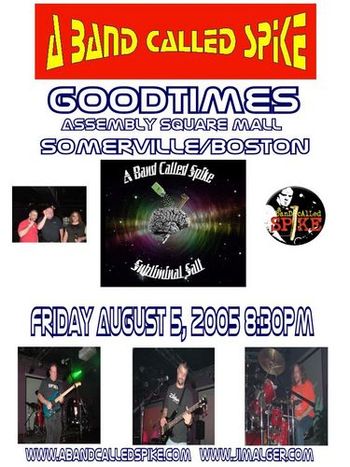 Another night in Boston 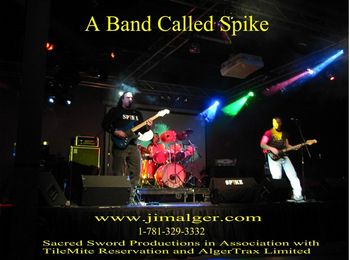 Promo Picture for the band 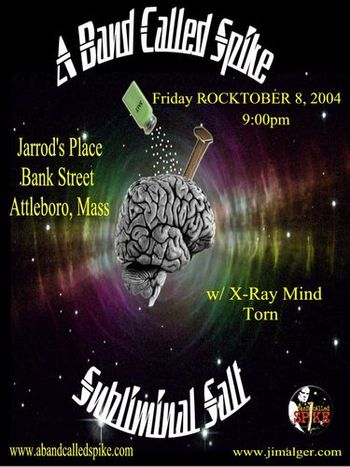 Jarrod's is now closed but the stench still lingers. 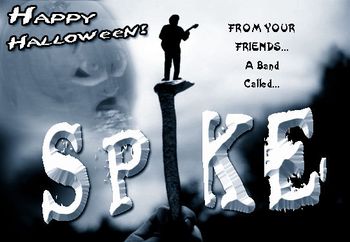